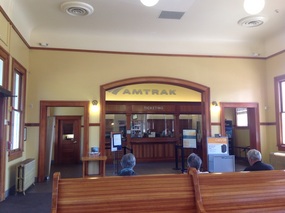 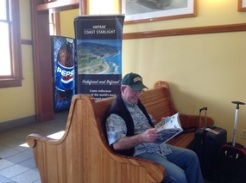 Waiting to board . . . without getting bored 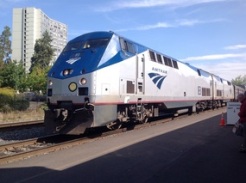 After three months of planning it was time for our adventure to begin! Our son, Jeffrey, accompanied us to the historic Amtrak station in Eugene, Oregon so he could drive our car home. The sixty-one mile drive east helped distance us from duties and responsibilities at home.  With each mile I felt a little more stress flow out of my body.  After hugging us goodbye, Jeffrey drove away, and we had a few minutes to catch a football game at the pub across the street until it was time to board. Train personnel handled our checked bags and we were only left with a couple of carry-on bags to maneuver up the narrow steps to the second level of our train car. We settled into our seats at the front of the car with plenty of leg room for our bags. Even with the footrest up for comfort there was room to spare. With an electrical outlet to keep my cellphone charged, I couldn’t imagine any other needs for the journey ahead Larry was content watching the scenery, and we both commented about familiar areas along the way. The rocking movement of the train slowly extracted the stress of the last several months from my being and lulled me into relaxation…..a state I hadn’t felt, except in my weekly yoga class, for far too long.  My community duties as regent of my Daughters of the American Revolution (DAR) chapter, co-founder of the Florence Herb Enthusiasts (with responsibility of organizing and facilitating the monthly meeting), board member of the Oregon Coast Military Museum (requiring much more time than I originally thought), member of the Siuslaw Genealogy Society, volunteer at the library to assist others with their genealogy, along with other civic involvement, occupied a great deal of time.

To complicate an already busy lifestyle, my mother-in-law suffered a severe stroke on February 27th. I supported my husband as he dealt with Mom’s care from a distance of a thousand miles. He had one trip south to see her and was able to handle some details with his brother while there. May 28th Mom passed and we headed south for her funeral and additional details. Thankfully we were still in town when my mother was life-flighted to the hospital. I was able to spend time with her and my sister before we returned home.

Two months later I flew down and arrived in time to see my mom while she was lucid enough to tell me she loved me. My sister and I were by her side when she passed the next day. My sister agreed to give our youngest son Mom’s car, so instead of flying home, I drove the car to a three hundred and sixty-four dollar stop for transmission and tire service This service gave me peace of mind for the rest of the thousand mile journey. Two weeks later I drove back to San Diego (in my own car) for Mom’s funeral and my forty-fifth high school reunion. After almost a week with my cousin (who is more like a sister) and a fun DAR conference, I headed home to tie up loose ends with my volunteer jobs and start packing. After months of feeling like a hamster on a treadmill, I was more than ready for a vacation.

Settling into the peace and quiet of the Amtrak train was a very welcome change. The stops in Salem and a few other places were brief. At a stop before Portland, three Park Service Rangers boarded and narrated the scenery with interesting tidbits of information and trivia all the way to Seattle. Larry made our reservation for dinner at six p.m., to allow time to dine leisurely before our scheduled eight-thirty arrival in Seattle

Other diners seemed to be having a leisurely time too, which delayed us being called until six-thirty. A young man was seated at our table. My first thought when he joined us was, “he’s probably less than thrilled being seated with us two old people.” Much to our surprise, Julian was extremely bright and intelligent and we were sad to end the conversation when the train neared the station earlier than expected. This professional snowboarder encouraged my hope in his generation. Having our luggage arrive on the baggage carousel was a welcome relief. Miraculously, the seemingly lone luggage cart appeared next to the baggage area, which was a huge help in carting it all outside to a waiting cab. The cab ride was only ten dollars and not too scary as the driver tried to get us to our destination in record time. The bellman, who greeted us at the Seattle Waterfront Marriott, whisked our luggage from the cab as we proceeded to the front desk to check in. Within five minutes we were in our room, with a balcony overlooking the harbor. Our view included Pike Place Market just a little to the south.